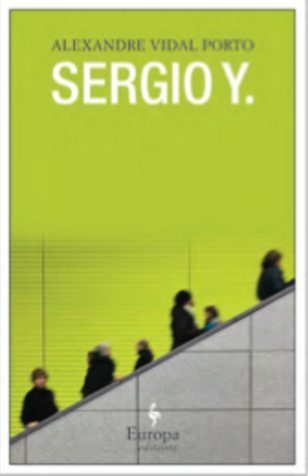 "Deserves to be written about and needs to be discussed" (Roughghosts, Joseph Schreiber - Canada)

“beautiful, gregarious book (...)I loved every word of it". (Of books and reading, Vivek Tejuja - India)

​"In Sergio Y., Alexandre Vidal Porto makes it clear why he is one of the essential writers in Brazilian contemporary literature." (Luiz Ruffato, author)

"It is impossible for the reader to put the book down." (José Castello, author and literary critic)

“I do not know if many people are talking about this book. If they are not, they should be.” ​(Carol Bensimon, author)

“A beautiful, moving, profound book... Sergio Y. is wonderfully accomplished and subtle and I am so glad to have read it." (Andrew Solomon, author of Far from the Tree)

​"A poignant tale about identity and the search for happiness" (The FT's Summer books 2016, The Financial Times​)

"Porto’s captivating, impeccably structured novel is a detective story wrapped around a deeper exploration of identity"

​Let me get right to the point: Sergio Y. vai à América (Sergio Y. Goes to America – I love this title) is one of the best books I’ve read in a long time. I gush to everyone I meet about its captivating characters and story. Great literature travels well and this one already has its bags packed.
This book was kindly sent to me by Companhia das Letras shortly before I went to Flip, and I actually finished it back in July.  So why’s it taken me so long to review it? This is one of those books that hits you hard, lingers in your head for days, weeks, leaves you wanting to say so much, but not knowing quite where to start. It’s also hard to talk about without revealing a pretty major spoiler, which ultimately I’ve decided not to reveal here. If you’re reading this and you can’t read Portuguese, don’t think I’m being a cruel tease. It’s just all the more reason to pressure your friendly neighborhood publisher to snatch this one up for English publication!
Armando, the narrator, is a psychiatrist, one of the best in São Paulo. He’s a sophisticated, older man who prides himself on his strong professional reputation and patient success rates. One day, a troubled high school student named Sergio is referred to him for therapy. Sergio comes from a well-to-do, loving family and wants for nothing, but feels incredibly unhappy. Armando deems him an interesting patient, and agrees to take him on for regular appointments. One day Sergio abruptly ends his therapy and Armando never hears from him again. Armando more or less moves on with his life, until running into Sergio’s mother at the deli counter in the grocery store. She thanks him for everything he did for her son, and informs him that Sergio is now happily living in New York and about to open his own restaurant. Spoiler!, spoiler!, spoiler!… and Armando discovers he somehow failed to see a rather important piece of Sergio’s puzzle. He grows obsessed, setting off like a detective to discover where he went wrong, defeated by the feeling that his professional ability has been questioned, wondering whether he truly helped Sergio, despite significant evidence to the contrary (including statements from Sergio himself).
This book hooks you from the first page, and by the time the aformentioned spoiler is revealed, it’s impossible to put down. There’s also a fascinating parallel story about a Lithuanian immigrant, Adriana Zebrowskas, who as far as I can tell is fictitious, but adds a great sense of reality and memoir to the story. The chapters are short and the writing is clear, elegant and direct and moves along at nice clip. As one reviewer put it, it’s almost as if the author wanted to avoid the reader going back to read something twice.Sergio Y. vai à América deals with some pretty heavy stuff, touching on themes of identity, the search for self, memory, death, depression, exile and gender. Yet, ultimately, it’s about transformation and the search for happiness, and the freedom to choose which paths we take in life. Surprisingly, I was left with an overwhelming sense of hope.

​An experienced São Paulo psychiatrist treats a boy for one year and does not find out that he is transsexual. Sergio is physically a man, but carries within him a feminine soul. So goes the main theme of Alexandre Vidal Porto’s second novel. In this book, which received the Paraná Literary Prize in 2012, he explores the intricacies of sexuality and reflects on the construction of the different identities that we assume through the course of our lives.
As a diplomat, the author visited prisons, drafted documents on human rights, visited favelas and government offices and had contact with people of many nationalities and ethnicities. The shocking contrasts between cultures and the gains and losses resulting from them caught his attention and has shaped the universe of his fiction.
Some of his characters are uprooted, displaced, unhappy and abandon their place of origin to follow unanticipated paths. In his first novel, Matias in the city, published in 2005 by Record, Alexandre Vidal Porto showed a mastery of language in telling a story about an ordinary man, a lawyer dealing with his anxieties and a difficult marriage, with São Paulo as a backdrop.
In Sergio Y. goes to America, his prose is again clear and simple, as if to assure that no reader will have to read his sentences more than once to understand the gist of his complex story. Sergio goes to New York, begins to dress in women’s clothes, undergoes a sex-change operation, opens an upscale restaurant, and lives under a new identity and a new name: Sandra. This, until being brutally and stupidly murdered.
The psychiatrist begins a search at once obsessive, detective-like, and psychoanalytical to try to understand the trajectories, the motivations and the great transformation of his former patient. He feels frustrated for not having understood a fundamental feature of Sergio’s personality and considers that a professional failure that puts in question his competencies as a doctor. He suspects that he did not help his patient sufficiently, despite much evidence to the contrary.
The book is narrated with elegance and in an agile rhythm, like a thriller in which the story unfolds of Sergio and Adriana Zebrowskas, who leaves her home country of Lithuania, marries a man in New York and, after the death of her husband, assumes a masculine identity, transforming herself into Angelus. Like Sergio, Adriana wants to break free to kill and bury one of her personas, to make lemonade out of the large lemon that nature put in her life. Sergio and Adriana have the courage to transform themselves in their search for happiness. For these two characters, being happy means something simple: the absence of pain and the liberty to choose how to live and what paths to take.
This is a complex and difficult topic. In dealing with it, Alexandre Vidal Porto comes out well. He writes his story with subtlety and delicacy. The author never judges: he simply presents the internal world and the aspirations of his characters, through eyes of sympathetic understanding.

III) ON ALEXANDRE VIDAL PORTO’S DIVAN: Author gets it right in telling a complex story delicately and without judgment

Any observation about the plot of Sergio Y. goes to America, by São Paulo writer and diplomat Alexandre Vidal Porto must be made carefully so as to not spoil the surprises of the turnaround that takes place in the first third of the book. The plot revolves around Sergio Yacoubian, the grandson of Armenians and the son of a wealthy São Paulo family, who, at the age of seventeen, seeks the help of psychiatrist Armando. During the first consultation, the boy explains that he considers himself unhappy, without, however, this becoming evident. “He was sober. His sadness did not transpire. If he did not profess his feelings, no one would know of anything. He would never raise suspicions,” recounts the doctor and narrator.
This sobriety was the expression of a precociously mature soul. Sergio did not deny his unhappy condition and even recognized it, but rejected it, ran away from it, tried to conquer it. Seeking out therapy was evidence of his effort. Still, he did not show it. “With me, he spoke more of his family than of himself. I have the impression that he, in speaking about his family, wanted to expose the history of where he was coming from, the web of which he was part.”
After more than a year of therapy and after a vacation trip to New York, Sergio returns, thanks the psychiatrist and says he no longer needs his services. He feels cured. The two do not see each other for the next four years and Armando learns of his whereabouts through his mother, in conversation while standing in line at the deli of a grocery store.
The young man had graduated in gastronomy, started a restaurant in the largest American city and lived a fulfilled life. Two months later, however, the doctor comes across a news item on the internet that leaves him desolate. Guiltily, he decides to investigate his former patient and suddenly finds out about a surprising story and new characters, such as Sandra and Laurie Clay.
Armando thinks he overlooked a fundamental feature of Sergio’s personality — an unforgivable professional failure which puts his performance in question. “Whose responsibility was it? Mine also? Was I guilty for not having done anything? Was I guilty for not having seen anything? For what serious medical error was I responsible? Malpractice? Negligence? Hubris?
In his second novel, Vidal Porto confirms that he is an excellent storyteller, with mastery of language and with characters that are captivating and well developed. They are displaced types, in which his perception as a diplomat around the world is noticeable. But he also has the perspective of those who live in a city like São Paulo, where urban self-exile and isolation create insurmountable barriers, to the extent that neighbors living in adjacent apartments for years do not know each others’ names; rootless people, refugees of the solitude that great cities impose on their residents.
Winner of the 2012 Paraná Literary Prize, narrated in elegant and rhythmic prose, with the pace of a police thriller, Sergio Y. goes to America has language that is clear and simple, in contrast to the over-refined, chaotic and confusing narrative, marked by arrogance, so common in the work of many celebrated contemporary Brazilian authors. Vidal Porto concentrates on the story and is interested in characters full of life, even when in difficulty understanding what surrounds them.
This beautiful novel is moral but never judgmental. It exalts the freedom of choice and the importance of making decisions and following up on them. Simple, un-patronizing, un- pedantic, intriguing — and very difficult to put down.​​